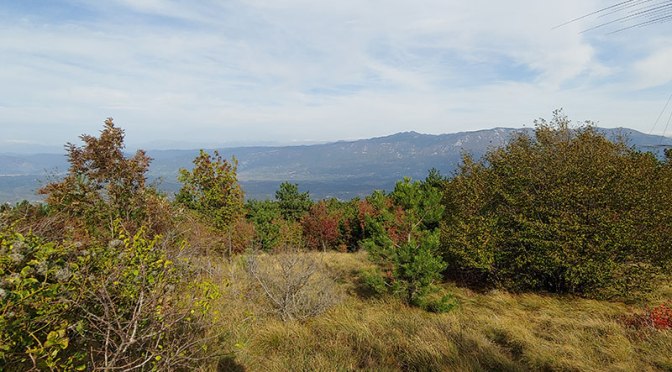 This time our journey took us to Karst, to a small Karstic village near the Italian border, named Vojščica. We joined an organized Autumn hike on Trstelj, the biggest peak of Slovenian Karst. It happened on Sunday, 4. November 2018, with a start next to an Old school and church St. Vid.

The hike was organized by the Sports cultural touristic society Farjovca and it was almost 15 kilometers long, which took us around 5 hours to complete. The hike was guided by a personal guide, with some stops along the way.

As already mentioned, we started our hike in the village Vojščica, with enrollment. The contribution for the hike was 7€, which included lunch after the hike, introductory and intermediate aperitif, energy snack, guiding and music surprise. The hike was free for children under 10 years. After the enrollment, we tried some homemade aperitifs, took some photos of the village and people, who arrived before us, while we waited for the beginning of the hike. Vojščica is a nice and small village, with typical Karstic elements and kind people.

Soon, time for our departure came, but before that, the organizer explained a couple of things about the hike and welcomed all who joined the hike. After that, in an aggregated column, we were on our way towards Trstelj. First, we had to come out of the village Vojščica, the path then took us on the gravel road towards village Lipa. On the path, we meet a donkey and a sheep. As it is already autumn we were able to enjoy various nature colors and Karst land. Karst is a rocky territory, where the influence of natural water on limestone creates various surface shapes, caves and typical underground streams. Along the path, we could observe many of rock walls, which are typical for Karstic lands.

The path also took us on the route of old Austria-Hungary military railway Dutovlje – Kostanjevica. When we reached the informational boards, that was our first stop, where we got some information’s about the railway route. Some also used this stop for refreshment. Here we turned left towards the neighboring village, named Lipa. Lipa is a typical nucleated Karst village, at the foot of Trstelj and also a popular starting point for the ascent. After the hike, we also took the time to visit the village more thoroughly, it has many interesting things to see.

In the center of the village, we stopped for some energy snack and aperitif. We also had accompanying music, a singer with an accordion. We could hear some traditional Slovenian songs, and also some Italian lyrics. After the break, we started our ascent to Trstelj, through the woods of the elevation and on the path towards Trstelj cottage, named Stjenkova cottage. Some of the hikers stopped here for rest and refreshments, but most of us continued to the top of Trstelj.

Just a few meters before we reached the top, we already heard the sound of the accordion. When reaching the top, we got something to eat and drink. Also, a beautiful view opened to the surroundings. On the top, there are radio and television transmitters, which go high in the sky.  There are also directional boards, a pole with cardinal directions and two mountain directional panel. After refreshment and some good music, it was time to continue on our way. From here on, only descend awaited us. The path took us in a direction towards peaks of Črni hribi (en. Black hills) and Cerje.

After a short descent, we turned left back towards village Lipa and on the path, we came towards village Vojščica, back to the starting point. Once we come back, yota and drinks were already waiting for us. The organizer also took care for benches and tables. Of course, now was also time for some homemade aperitif, it was really good. Yota, which surprised us with a lot of sausages, was really tasty. Then followed the award ceremony for the oldest and youngest participant of the hike. After that, they started to make roasted chestnut.

Once we got our energy back and had a nice rest, we (Travel-Slovenia) also took some time to see the village Vojščica and nearby Lipa. We took some pictures and also visited interesting locations. Both villages are really nice and you can see their Karst design. We finished our hike with some homemade red wine, named Teran, at a local winery.

Overall the hike was very well organized, we had a really nice time and will come again. We could see that people involved into the organization of the hike took their time to prepare it and try to promote local products. For us this is good, as we get to try them. We had a very nice weather, although at the end some black clouds were showing, but with no rain. It was good walk on the Karst and well spent Saturday.

Do not forget to check our entire path on SportsTracker site (feel free to follow Travel-Slovenia and our hikes around Slovenia).

This site uses Akismet to reduce spam. Learn how your comment data is processed.

HAVING FUN AND BEING ACTIVE

My Tweets
My Tweets

In search of new trails.