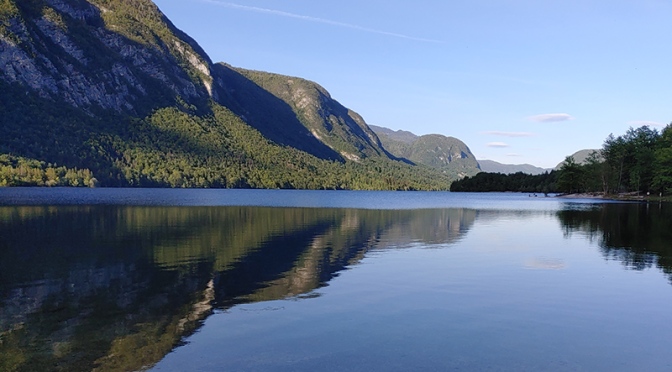 On one August Sunday, the path took us to Upper Carniola, namely to Bohinj lake. Around lake goes a hiking trail that offers many beautiful views. We start our trip in Ljubljana, drive pass Bled, and as usual, it is full of people, towards Bohinj lake. Bohinj lake is the biggest Slovenian standing and natural lake, it is located in the Julian Alps in Triglav National park and is considered as a natural landmark. Its main affluent is stream Savica, which in the western part of the lake pierces over moraines with boulders and flow into the lake at Ukanc. Stream Savica is a karstic spring with two branches, namely Velika Savica (en. Big Savica), where the waterfall is located, and Mala Savica (en. Small Savica). Mala Savica is torrential, and during the rain flows southwest from Velika Savica. Later the streams merge into one bed and continue under the name Savica. Before it flows into Bohinj lake, it is joined with a torrential stream Ukanška Suha.

Bohinj lake is a flowing lake and so the river Jezernica flows out of the lake. After only 100 meters, together with river Mostnica, forms river Sava Bohinjka. By size, the lake is only surpassed by intermittent Cerknica lake, when it is full, and artificial Ptuj lake. Here we will again mention waterfall Savica, which is one of the most known waterfalls with a touch romance and with a special historical meaning. And as such the most visited waterfall. We went to the Savica waterfall in July, the path to the waterfall is arranged in the middle of the forest. Along the path, beautiful views towards Bohinj lake open, at the same time, we can see how Bohinj lake was formed. Bohinj lake is a glacial lake and his valley is in the shape of the letter U. The view on the waterfall is very enviable and wonderful, the nature around it offers the perfect environment to spend your free time.

Let’s return to Bohinj lake and the path around it, the path is around 12 kilometers long and is suitable for the entire family. Our youngest member of this day was 3 years old and he walked the entire path on his own. At the same time, he immensely enjoyed all the attractions the path offered. We started our walk at Ukanc, on the right side of the lake in the direction towards Ribčev Laz. From here a beautiful view opened towards the lake, it showed in all of his might and greatness. Along the lake on macadam road, along the beach towards the main road, which we cross and continue on the other side. As this part of the path is a little aside we decided to take it first, as on the other side the path is more beautiful.

We continue along the macadam path, with a very little view on the lake, but we still enjoyed the shade and other attractions that the path offered. Here we make a shortstop, next to the board, which we saw along the path – titled Visiting nature in Slovenia. Be responsible towards nature and take your trash with you and discard them in a suitable place. On most of our visits to nature, regardless of where we went, we mostly brought home with us the garbage from other people, who irresponsibly dumped them along the way.

The board is located next to scout camp, where in summer months scouts go. We continue along the path, and slightly ahead another view towards the lake and surrounding elevations opens. We see many smaller tributaries that flow from the hills into the lake. When we slowly progress, we came to the tree that took our attention. It is located next to the road, which leads towards Bohinj home. If we looked at it from the right angle, we could see the bear head. Moss on it showed that it is here for some time. Of course, we used this and took some pictures.

Soon we come to the small church, which in all its beauty stood on our way. It a subsidiary church of St. Duh ob jezeru (en. St. Spirit by the lake). The church was erected in the 18th century after the inhabitants’ of Bohinj in distress took an oath to build a church next to the lake. During that time, the fields of Bohinj has been poorly producing for several years, and the worm destroyed the whole crop, in that distress the inhabitants decided to build a church and to celebrate three Wednesdays each year – the fourth Wednesday after Lent, Wednesday after Easter and Pentecost. The first oath to build the church was fulfilled in the year 1743, the second is still being fulfilled today. The church is from the outside a good architectural construction example with paintings on the façade and ornaments on the edges. It is fenced with a small stone wall, and unfortunately, such small churches are mainly closed and opened only on special occasions.

We continue along the macadam path, where again a view towards Bohinj lake opens. Slightly lower we again cross smaller tributary, which we examine more closely. It was especially interesting for children. Along the path are benches, suitable for rest, and at the same time, one can adopt individual bench and co-create the stories of Bohinj lake. With that, you can contribute your thought-dedication-name that will be imprinted on a special tile on the bench. Here also the view towards the church of St. John the Baptist (si. Sv. Janez Krstnik) opens. But first, we head towards the small bay, where they were just training with small sailboats.

Few meters ahead, on a bigger rock, a statue of a “Goldhorn” is located that stands mightily next to the lake. Goldhorn, the mythical chamois with golden horns, indicates the enchanting and mysterious land. With the arrival in the bay and seeing the Goldhorn statue, we arrive into Ribčev Laz, which is an idyllic village in the area of Triglav national park. It is located on the eastern shore of Bohinj lake.

Here, across the river Jezernica, the church of John the Baptist is located. But before we continue, we take a walk around the small park, where drinking water is available. In the middle of the park is an information board with a model of Triglav and the first hotel in Bohinj. The children are especially enthusiastic about the water fountain located here and the ice cream. The bridge at the mouth of the lake and transition into river Jezernica represents nice architectural achievement, across which we walk towards the church of St. John the Baptist. The Stone bridge is called Janez’s bridge. The church, together with the bridge and the view back on Bohinj lake, is the symbol of Bohinj. It is stylistically the richest church in Bohinj and it dates in time from Romanticism to Baroque. At the same time, it belongs to the most beautiful samples of Slovenian medieval architecture and wall painting.

Next to the church stands a monument to the Jesenice-Bohinj detachment and their victory against German invaders. With the victory, they prevented them from the arson of Upper Bohinj valley. The path from here remains macadam but is sunnier. Because of that, we suggest using the cover and sunscreen. All the way we follow the yellow and white blazes. Slightly ahead, in Stara Fužina, is a grassy beach and a suitable place for swimming in the lake. On this side of the lake, there are many suitable spots for relaxation and swimming. We also saw windsurfers. We stop here for some time, to dip our feet in the lake. The children throw a stone or two into the lake, safely of course. This part of the lake is called Fužina bay.

We soon continue along the path, on the other side of the like, and on several places a beautiful view towards the lake and surrounding hills opens. Soon we again come to the small tributary or sink, where the water is collecting, and at the same time offers cold refreshment. After a short break and refreshment we continue, and all the time we are followed by the hot sun. Towards the end, the path narrows slightly and takes us through the forest. In the end, it opens again, with a beautiful view back on Bohinj lake. At that point we come back to Ukanc. From this point, we are accompanied by Goldhorn fairytale path, slightly lower we come to Jezernik, a waterman, and other informational points of the Goldhorn fairytale path. At this point, we get lost a bit, as we did not know which way to turn, left or right.

We decided to go left, which was, of course, wrong. But it took us to the stream Savica. Slightly lower along the stream, we come to the point where Savica flows into Bohinj lake. After seeing it, we head back and to the right along the right path towards our starting point. We cross the stream Savica and from the bridge a beautiful view on crystal clean water opens, which with its speed paves its way towards the lake. Along the small path towards smaller meadow and Perkamdeljc, who is part of the Goldhorn fairytale path. Another view opens here towards the hills. Perkmandeljc is a small dwarf, who teases miners, when they dig ore, as he does not like that people come that deep into his tunnels. The path takes us past old, we assume characteristic, houses to the next fairytale path point, where a Goldhorn is. Goldhorn is white chamois with golden horns, who guards the treasures of nature. The path ends next to the road, where the starting point of the Goldhorn fairytale path is. On the path, two rules apply, namely love nature and protect it carefully and be nice with all living beings that you meet along the path.

With that, we finished our hike around Bohinj lake, only a few hundred meters to the starting point and we are done. We walked 12.68 kilometers in 5 hours, and the entire path can be seen on Sports Tracker. The path offered many interesting and new things, and in doing so, we got to know Bohinj lake and the places around it better. Information boards gave some additional information, the views that it offers completed it all. In the end, a refreshment follows, a little bigger snack and a short break. There is nothing better than resting next to the lake and enjoy the view.

The day was sunny and suitable for this kind of trip, we only suggest that you go on the road earlier and thus avoid the crowd on Bled. This is why we suggest Bohinj lake for your next trip, as this kind of place is beautiful and great for spending your time. You can extend your trip to the waterfall Savica, in case you have some extra energy in store. The path from the entrance towards the waterfall will take you around 15 minutes. After rest and refreshment, we head towards home, along the way we stop on Bled to take some cream cakes with us. The drive back was full of nice memories and good impressions.

We invite you to see the impressions, which were made along the path, and maybe we convince you to visit these places. Slovenia is, no matter where you go, wonderful. In the end, we invite you to like and share this post with your friends. And do not forget, you can follow new discoveries and stories on Instagram, Facebook, Twitter, or Tik Tok. As mentioned, you can see the entire path around Bohinj lake on Sports Tracker. Visit our YouTube channel and see published videos.

This site uses Akismet to reduce spam. Learn how your comment data is processed.

HAVING FUN AND BEING ACTIVE

My Tweets
My Tweets

In search of new trails. 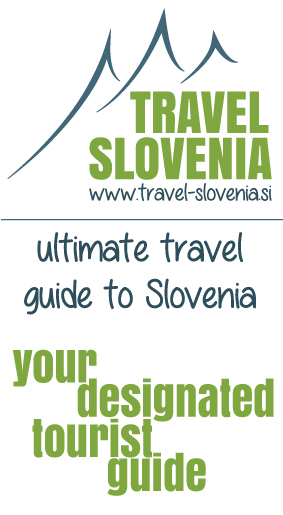